We try to make it to the restaurant in time for the sunset but a broken stoplight means we get there just after the sun blurs into an orange memory over the horizon. The deck of the restaurant sticks out over the sleepy black water below. There is a row of fishing boats resting at their docks. We sit in one of the wooden booths next to the rail. A blue tarp roof does nothing to keep the October mist off our faces. There are two trash cans next to the door, both full. Next to the door there is a bar they shut down on Labor Day. The smell of bilge drifts up from the boats and mixes with the smell of fried flounder. A few gulls dive for their dinner while others stare at me. “I’m thinking I should try something new,” I say to Lisa.

“Really?” she says, even though she doesn’t actually seem surprised.

“You know I love the fish and chips but I always feel like I wimp out when I don’t try the shrimp.”

“Yeah,” she says looking at her menu.

The waitress brings two paper cups that say Coca-Cola but hold ice-water and she puts them on the table with two wrapped straws. She says she’ll be back to get our order. I try to identify the name of one of the boats. I squint and see it is Isabelle Rose. Beautiful. I lean on the wooden table. Because it is so saturated with water, it feels soft, like I could take chunks of it out with my fingernails.

“Have you thought any more about the thing I asked you about?”

She shakes her head and goes back to the plastic menu.

“I don’t know how you sort that kind of thing out.”

“By dealing with it. I have to deal with it.”

“But I’m not sure what you want from me.”

“Well of course I’m your wife, and I love you, but I can’t sit around feeling sad for you all the time.”

“Up until recently, I didn’t even know about all of this.”

“I tried to tell you, but you never wanted to hear about it.”

I look up at the blue tarp. It sags in one spot where rain has pooled. I ask her, “Do you remember when the hurricane pealed our tin roof half-off the old house? Remember how in the middle of the storm we had to drill holes in the ceiling to relieve the pressure and keep the whole thing from collapsing onto the furniture? God, it was horrible to watch the storm pouring into our living room.”

“How could I forget that? What a freaking nightmare.” She takes a sip of her drink. “But we got through it.”

She puts her arm in the air and turns her hand over with the palm up and stretches her lovely fingers out, like she is trying to catch the mist. She smiles at me. “Do you want to go to Phil and Ellie’s party this weekend?”

“Well, we don’t have to.” She reaches across the table and covers my hand with hers.

“No, really, we should go.” A gull lands on the splintered rail that wraps around the deck. I take a lemon wedge off the waxy edge of my cup and squeeze it into the water. Then I take my finger and put it into my mouth, taking in the sharp citrus.

“Do you know what you want to order yet?” I ask her.

Still looking at the menu, she says, “Yeah, I’m going with the usual.” 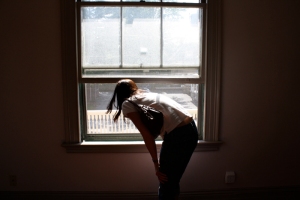 Author’s commentary: A teacher once told me that I tend to write a lot in negative space. Ironically, I heard something in the negative space of his comment which was that I should try to do this less. After thinking about what he said for a good while, I had to agree with him that my tendency was indeed to write in that place. But the truth is what I want to do is get better at filling the negative space instead of trying not to write there. If you look at visual art, it is not that the negative space is invisible; what is not seen. Not only can you see it, but it is as critical to the art as anything, and in truth the negative space can quite literally define what you see. In fiction, I don’t believe negative space can be simplified into being the things which are not said. I believe it is the space which is there in its own way, doing its own thing, and which absolutely informs you as to what to see in the words which are there.

Lou Freshwater is a student of literature and Existential philosophy, but mostly she loves spicy food and the Delta Blues. She considers herself to be a lifelong student of these and other things. Her poetry and fiction have been published in Red Wheelbarrow and Modern Haiku, and she has also published an essay on the Existentialism of Arthur Miller and Tennessee Williams in the Arthur Miller Journal.