Posted on October 15, 2013 by bluefifthreview 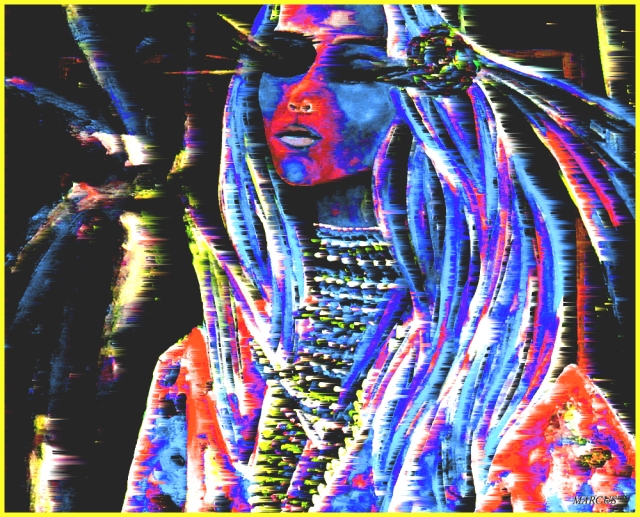 Karen Lewis, Ojai Arts Commissioner, writes of Marcus’ technique: “This deft brushwork, and ease and fluidity of painting, and pushing for color, is never more evident that in Marcus’ series of small female figures and portraits painted directly from life.” Marcus was awarded First Place: “Best of Show” at the Juried Group Show, Art in the Park, Ojai, California, 2004. Visit her work at Fine Art America.

A ping of stones spat down by addled blackbirds.
Even the clouds mutate.
On youtube, a tiny monk in a 4 minute clip
hushed the crowd of family in a galaxy of candles.

Cold in the new wind, a golden birthday eve.
An old man, loaded guns disabled, finally.
The girls went ga-ga for the fruit on sticks,
a basket arranged as faux flowers, thankyou.
The singed scents of discarded pumpkins.

In the middle of the night, I found the small stool,
then climbed for the quilt on the top shelf.
In the bottom drawer, leaf motifed notecards
await inevitable future sympathies.
A semblance of darkness descending.

Ann Neuser Lederer was born in Ohio and has also lived and worked in Pennsylvania, Michigan and Kentucky. Her poems and nonfiction appear in journals, anthologies, and in her chapbooks Approaching Freeze, The Undifferentiated, and Weaning the Babies. Additional information available at Ann Neuser Lederer.

My old man wore a shirt and tie to work, considering it an achievement rather than a burden. A butcher by trade, he ran the cutting room at Wilt’s Super Mart. Up every morning by five, he started at six. Lying in bed, I could smell his after-shave, hear him sipping coffee.

The summer I turned sixteen, I wrangled a job on the set-up crew at Nomad RV. I drove my old man to work, picked him up after, an hour to kill before the factory whistle blew.

I liked watching the old man’s crew. Wex and Coop shouldered beef quarters and broke them down. Ankle deep in saw dust, blood all down their aprons, their breath condensing in frigid puffs, they carved steaks and chops. Two fingers missing on his left hand, Coop talked trash. Wex, dark and brooding, nodded along, a cigarette dancing on his lip. Johnny the Little Polack, and Casey the Cowboy Playboy trimmed fat from bone, their knives quick as flame. Jimmy the Kid, ground hamburger, while Stella wrapped chicken breasts. Stella with the red hair, green eyes, and broad rump.

They bowled in winter, played softball in summer. Twice a month someone hosted a euchre game. My old man always popped for the pizza and beer.

Coop held a second job, working nights at a processing plant he eventually inherited from his father-in-law. Casey’s heart condition got him before his time—died in the saddle like Rockefeller, the guys joked.

Jimmy went on to run a cutting room of his own. Wex beat his wife nearly to death, and did time in the state pen. Stella, married a rich man, and wrapped chickens no more. Johnny and my old man lost everything when the company sold out.

No one saw it coming.

A lawyer by background, Gary V. Powell currently devotes most of his time to writing fiction and wrangling a 12-year old son. His stories have appeared at Pithead Chapel, Newport Review, Fiction Southeast, Prime Number, Carvezine, and other online and print publications His first novel, Lucky Bastard, released in December 2012,  is available through Main Street Rag Press.

An American in Belgium

1
Clocks imprisoned in stone began ticking. Everybody born here seemed to know what that meant. I hadn’t spent much time in skyscrapers, holding the black receiver to my ear.

2
The rain fell. I watched through the train window. Cows were kneeling in a field out of a mistaken notion of politeness.

3
A hand had washed ashore outside Antwerp. Somebody mentioned the Congolese; somebody else, the Russian mafia. “Can you taste the honey?” another new friend asked, the table crowded with bottles and bulbous beer glasses. I said I could. I couldn’t.

Howie Good, a journalism professor at SUNY New Paltz, is the author of five poetry collections, most recently Dreaming in Red from Right Hand Pointing and Cryptic Endearments from Knives Forks & Spoons Press. He has four chapbooks forthcoming, Elephant Gun from Dog on a Chain Press, The Death of Me from Pig Ear Press, Living Is the Spin Cycle from Red Bird Chapbooks, and Strange Roads from Puddle of Sky Press.

The river flows backwards between my legs.

My legs remember my uncle, how he brought me vines of peanuts, put them on my porch in the woods, before I woke up, how I would walk out into them barefoot, as if into dreams not yet risen into Alabama mists of summer heat.

Summer heat mirage was the reason I saw the story up ahead, and ran toward it, thinking some kind of narrative was the answer, some kind of forward movement, some way out of the mundane grocery store, chicken houses, and snack food in plastic wrap.

Plastic wrapped around the edges of the dead horse kept it from seeping into the well.

The well had its secrets made of snakes, eyes, mirages, and a bucket full of gold.

Gold was what my other uncle sold, drawing his body toward it like a mecca, as he curled over the table with his magnifying glass sticking out cyborgian, his eyes dark and his left one gigantic through the little round attached lens, as he raised his head from his curl, assessing the likelihood of anyone wanting precious metals.

After years of losing money, he turned over his jewelry shop to his son, who  made it into something everyone wanted, because his eyes glowed even brighter for the women, of which I was one.

I could choose between golden eyes or peanuts to follow into their ideas of Heaven.

Heaven, they said, must have a reservation for me, or I would have to take my chances with becoming fire that nothing could put out, even rain.

Even rain couldn’t wake the well from its coma.

The horse had taken my uncle into the stars with his whiskey and his guns.

His guns had taken some of the men of color off the mountain.

The mountain hunts its own prey.

Predators frighten their prey so much, they become plastic, gold, mirages, mist, and can’t move, can’t even imagine moving, and they are gone.

Gone into the well in the bucket, the gin stayed cold, until it was time to sell, at the casino.

The casino’s sign of the snake beside the door was crooked, like the staff the owner slapped down on the hands of anyone examining the loaded dice.

Loaded dice is the only reason I am alive today.

Alive today, coming out of the mists of horses in the rain, secrets, and whiskey, I find answers to be elusive, for good reason.

Good reason my uncle would be out back wandering in the dark woods, happening to see in me naked in the bathroom, day after day.

Day after he brought the last peanuts of the season, and I saw the glimmer of his eyes in the dark on my white adolescent skin, once again, I ran away.

I ran to stay with my great aunt, in an attic shaped like a wedge, painted yellow and gold, buzzing with insects that became my only friends.

Only friends would have told me why I felt the way I did, why I loved my uncle so much, and my cousin, and why nothing would ever make sense in life again.

Life again and again has given me only insects to be my friends, with their strange songs as the only answers to all my joys.

My joys have not been those of Heaven.

Heaven has only told me lies.

Lies and horses have taken me farther than anything else, and left me in the setting sun, golden, daunted but not dead, gambling that no one would figure out the glint in my eyes was for my cousin, and my uncle and would not melt in the rain, dissolve in the mist.

In the mist, they told confessions to each other about me, so they could get into Heaven.

Heaven must let in insects, the only truth-tellers I have known, who greet each other with their hands on their faces, touching each others’ mouths, putting inside them their little fingers, pressing their heads together, and the dice are never loaded, the well is never dry, the nuts are never too rotten, and my uncle, they say, has never loved anyone the way he loves me still, watching from a non-existent Heaven in a painted sky.

Tantra Bensko teaches fiction writing through UCLA Ex. Writing Program and her academy. She has two full length books and two more slated from Dog Horn and Make-Do, four chapbooks, such as from ISMs Press, and a couple hundred poetry and fiction publications in journals. She promotes others through reviews and chapbooks through LucidPlay, and by maintaining a magazine, resource site, and contest.

My set of rules when applied
permits me as the basic unit of poetry
to take alternative identities but
still perform the same function: god.

My body shifts right and upwards
as I transform, turn myself inside-
out in fun-house or whore-house
or house-of-guitars mirrors.

My mind twists across a double space
but I continue to prod flabby lines,
jostle bad breaks, some psych-
otic or odelic, pulling pinhead
consonants from around long sticky vowels.

My voice makes avowals to syllable avalanches.
Pen says, ink says, follow the melting
snowball and flake
out
off
through
down.

My heart permutes definitions, bending
them with feather boas or snakeskin boots.
I play a lame rhyme game near the end.
I submit to the golden stardust bowl.

I give the final word to my soul.

Karla Linn Merrifield recently received the Dr. Sherwin Howard Award for the best poetry published in Weber – The Contemporary West in 2012. A seven-time Pushcart-Prize nominee and National Park Artist-in-Residence, she has had 300+ poems appear in dozens of journals and anthologies. She has eight books to her credit, the newest of which are The Ice Decides: Poems of Antarctica (Finishing Line Press) and Liberty’s Vigil, The Occupy Anthology: 99 Poets among the 99%, which she co-edited. Forthcoming from Salmon Poetry is Athabaskan Fractal and Other Poems of the Far North. Her Godwit: Poems of Canada (FootHills) received the 2009 Eiseman Award for Poetry. She is assistant editor and poetry book reviewer for The Centrifugal Eye. Visit her blog at Vagabond Poet.

Blue Fifth Review, edited by Sam Rasnake, Michelle Elvy, and Bill Yarrow, is an online journal of poetry, flash, and art.
View all posts by bluefifthreview →
This entry was posted in Art, Flash, Poetry. Bookmark the permalink.