Posted on November 15, 2013 by bluefifthreview 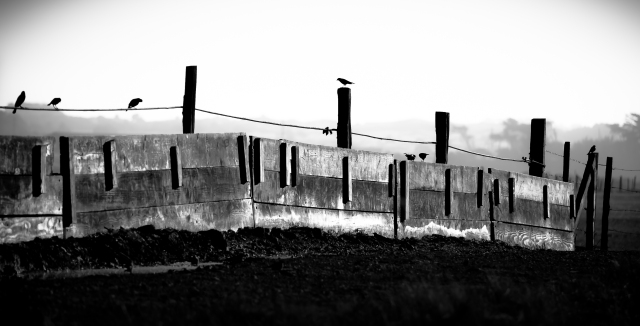 Artist, Jo Ann Tomaselli, on her art: “Defining myself as a particular type of photographer is impossible as every moment behind the lens offers an opportunity to see the world from a different point of view.  My photographic goal is to show the world simplified, clearer, less complicated.   My inspiration?  Color, shape, design and the most delightful factor of all ~ fun! I discovered this image while on a bike-ride.  Amazed that there are still rural parts of California where farmland and cattle ranches run right up to the coastline, I was delighted to discover this fence sitting in the middle of a pasture and no one about but the birds.”

I’ve started this quilt to unmake
my bitterness: This midnight blue
doesn’t have depth enough to edge it.
My best friend, Sophia, might die soon
of breast cancer.
If only I could purify her body
with these tiny white stitches.
This quilt is the best I can do for her—
each stitch bringing me closer to her,
involving me in the creation
of something I can touch.
It is an album quilt—each square
with a different meaning,
to remind her of the times
we spent together.
It is hers for comfort, for remembrance,
like the ones pioneer women received
before journeys they didn’t always
want to make.

Anderson O’Brien has published poetry in Heavy Bear Poetry Journal, Flutter, and The Dead Mule School of Southern Literature. She recently moved to Columbia, SC, where she lives with her husband and two dogs.

The winter storm was the worst in East Coast history. The abandoned house on the rocky promontory beside the harbour began to shake apart. A bellicose wind wriggled under the eaves, separating the shingles, sending them whirling one by one into the sky, lost in a torment of sleet. The old frame house was ripped apart, board by board, stud by stud; the fragments blown across the ocean, over the coast of Africa and deep into the Sahara where they were gathered by desert mystics as charms against evil dreams. Nail by nail, slat by slat, the mystics reassembled the house within sight of the Pyramids and left their ascetic caves for the comfort of sofas and carpets. Lions, escaping from the big game hunters to the south, moved into the attic, playing endless hands of shotgun poker for impossible stakes. Elephants discovered the refrigerator and sat around the kitchen table drinking cold beer, reminiscing about the old days at the muddy water hole. Busloads of tourists arrived, marvelling at how the ancient Egyptians were able to build a clapboard house deep in the desert, buying souvenirs and fake antiquities from amoral gazelles. The alcoholic elephants threw empty bottles and swore while the tourists took pictures and grinned. The lions, unable to stand the noise, moved to the city where they opened antique shops and wine bars, settling into the slow pace of suburban bliss, only occasionally hunting down overweight stockbrokers for sport. The elephants split for Zanzibar where an uncle promised them jobs in the carpet trade, leaving behind the sloe-eyed gazelles and the last of the mystics who wrote to the major networks every day in an attempt to pitch their idea for a cooking program based on pasta recipes derived from divine inspiration.

John C. Goodman is a Canadian writer who has published two collections of poetry, Naked Beauty and The Shepherd’s Elegy, as well as a novel, Talking to Wendigo, which was short-listed for an Arthur Ellis Award, and the non-fiction work Poetry: Tools & Techniques. He is the editor of ditch, an online magazine of experimental poetry.

There’s no autumn in central Texas
yet the sunlight’s sure got a nice bite
in mid November; it says you might
be welcome here, convalescence.
No fall! No fall at all! — in east Austin
women whisper of slips, nimble feet
dogs learn to land on, weary of questions
that aggregate but don’t, repeat, do not repeat …
Yet they keep on … arriving, those bus loads
of clusters, nova and nebulae, burning to be alone,
nursing the kind of hurt that’s only grown
up North. Oh, keep learning; sally forth you horn toads
busted fucked and yet, yet to be born;– play possum
kingdom in the one, only road: your unknown autumn.

Dennis Mahagin recently moved to Austin, Texas. He is the author of the poetry book, Grand Mal, available now from Rebel Satori Press and Amazon.

I Pawned My Boyfriend for 85$

I’m not saying I’m proud of how it all went down. But maybe if those collection agencies hadn’t been calling me all the time. After avoiding another 800 number last Saturday morning, I looked over at you sleeping, lips pursed, eyelids fluttering, all mussed up like a baby koala, and I thought: there are plenty of people out there who would pay good money for that.

You’re still pissed. I tried to explain that I won’t have the money to get you out until my next paycheck, but the pawnshop owner said that I was just riling up the merchandise and if I wasn’t gonna buy nothing then it was time for me to leave.

When I went in today you’d been moved to the front window display wearing a lovely tiara. I wondered if he would give me a deal on both because I really liked that tiara. You looked away when I walked in but then the owner said to be nice to the customers because Father’s Day is coming up, after all.

Today is actually our anniversary, but you didn’t want to hear it and wouldn’t open the card I brought. Look, you can’t hold onto your resentment forever I said. But you just turned away, tiara sparkling in the mid-afternoon sun.

Nancy Stohlman’s books include Searching For Suzi: a flash novel, The Monster Opera (forthcoming 2013), Live From Palestine, and Fast Forward: The Mix Tape, an anthology of flash fiction that was a finalist for a 2011 Colorado Book Award. She is a co-founding member of Fast Forward Press, the creator and curator of The F-Bomb Flash Fiction Reading Series. Find out more about her at www.nancystohlman.com

because i heard the word

the strength of your cheek hollow being the only aspect of humming concerto-ed into thoracic sound    beyond the gasp   which is not-making:

so, ambitious blank, path of Night pitted against a-u-m’s beginning middle and end,
here: life’s candled flickering
through which the word timber falls
as the word love falls
and the hole in the dark cracked oak
beckons you

Blue Fifth Review, edited by Sam Rasnake, Michelle Elvy, and Bill Yarrow, is an online journal of poetry, flash, and art.
View all posts by bluefifthreview →
This entry was posted in Art, Flash, Poetry. Bookmark the permalink.